The Global Rise of E-Transport Documents: A Comparison 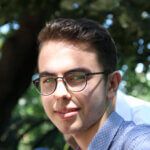 We’ve recently observed several countries, especially in Eastern Europe, begin their journey by implementing or announcing their intention to implement continuous transaction controls (CTC) e-invoicing. CTC e-invoicing is one of the most efficient ways to gain more significant insight into a company’s transactions and the entire economy. However, once CTC e-invoicing is established, many governments tend to look beyond and on to the next tool that can enable them to deepen their understanding: e-transport documents.

A recent example we’ve seen through Romania’s e-transport system requires taxpayers to use an electronic waybill system to obtain clearance of the transport document before the transport of goods begins. This process provides tax authorities with control measures during the physical transport of goods. Moreover, as is the case for Romania, some of the e-waybill systems are designed to link the data of the cleared e-waybill document to the data of the cleared invoice data approved through the CTC procedure, allowing tax authorities the opportunity to compare transactional data sets.

As is the case for CTC e-invoicing globally, there are no two identical e-waybill systems. Instead, each country designs and implements its unique flavour of an e-waybill system. In the Sovos Trends Report 2022, we have compared the requirements in a select group of countries that have introduced such requirements so far. 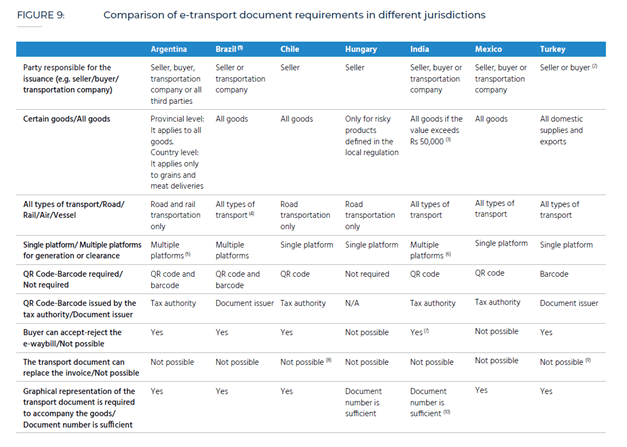 Hungary is another leading country in implementing an e-transport system, that differs from other EU Member States. The Hungarian government has had the Electronic Public Road Transportation Control System (EKAER) in place since 2015. The system requires taxpayers to issue an EKAER number to transport so-called risky products on public roads in Hungary. However, the EU Commission considered that the system breached EU requirements and sent complementary letters to Hungarian authorities in 2017 and 2019, calling for them to bring their systems in line with the EU regulations. Following these letters, the obligation to issue an EKAER number concerning goods deemed non-risky was exempted by Hungarian authorities as of 1 January 2021.

Another country worth mentioning is India, which has had an e-waybill system complementary to its e-invoicing system since 2020. According to Indian regulations, taxpayers must generate an e-waybill if the value of goods exceeds a certain threshold. Taxpayers currently in the scope of the CTC invoicing mandate are blocked from using the e-waybill portal to generate e-waybills and instead must use the e-invoicing platform (IRP) to produce them.

One of the distinctive features of the Turkish system is that e-invoices can replace e-transport documents if certain conditions are met. A similar feature is available in Portugal’s transport regime as well. Taxpayers can use the invoices as transport documents as long as they contain specific information required by Portuguese law.

Another aspect of developing e-transport documents can be linked to the EU-wide electronic freight transport information regulation (eFTI), which will enter into force in August 2024. The eFTI regulation requires competent authorities to accept the regulatory transport information in electronic form throughout the territory of the European Union, aiming to reduce administrative costs for economic operators and enhance the efficiency of competent authorities. While the scope of eFTI regulation and the e-waybill systems that have been introduced over the past few years overlaps only partially, it’s evident that we’ll see more digitalization of transport processes.

Need help understanding evolving VAT and e-transport requirements in countries worldwide? Get in touch with Sovos’ team of tax experts.

Enis Gencer is Regulatory Counsel at Sovos and is based in Istanbul, Turkey. With experience in compliance and legal consultancy he currently undertakes the legal monitoring and analysis of the regulations regarding electronic documents. Enis graduated from Istanbul University Faculty of Law.
Share This Post
North America ShipCompliant
Is Direct-to-Consumer Spirits and Cider Shipping on the Horizon for New York?

On September 13, 2022, California Governor Gavin Newsom signed AB 2280 into law, paving the way for the creation of a long-awaited Voluntary Compliance Program (VDA Program). However, before such a program can be implemented, two things must take place. First, the California legislature must approve funding for the program by way of an appropriation in […]

Affordable Care Act (ACA) reporting has started for tax year 2022. ACA reporting can quickly become complicated and costly with IRS penalties if your business does not have an efficient process in place. Although regulations have generally stayed the same for this reporting season, there are some important updates all businesses should be aware of […]

Just about a year ago, the Treasury Department published a report on competition in the beverage alcohol industry, which posited several ways to reform federal and state regulations to help create a more even playing field for smaller producers. Among the many ideas proffered, changing how the Tax and Trade Bureau (TTB) approaches and policies […]