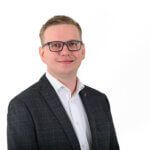 Unfortunately, the transition has been plagued by problems. We discuss some issues and how Sovos is approaching them.

We had anticipated that the tax return would remain unchanged, with the premium reduction at 20% and the standard at 100% carrying over from the previous version. Instead, the Slovenian tax authorities overhauled the return entirely. This included:

With the combinations, a return could include up to 30 different lines, but the return only includes four – one for each combination.

This layout suggests that the tax authority wishes to combine policies with the same rates, e.g., 100% and 9%.

This differs from previous returns.

Previously each class of business had a separate line. Sovos has contacted the tax authority about the most compliant way to complete this.

Telephone numbers now have a set number of boxes instead of an open line.

This requires clarification from the tax authorities:

Postcodes also have the same issue.

As frustrating as these issues are, there is a more significant frustration.

The amount of time between the new return’s publishing and the first submission deadline The new return was published online roughly three weeks before the deadline.

This was a very short turnaround to upload the returns to the systems and solve any problems that may have arisen, as well as informing clients about any new information that may be required here.

Fortunately, no new information was required. Short deadlines to comply with new tax return requirements are a frequent problem we encounter.

Guidance from the tax authority has been inconsistent at best.

For example, the law passed in May 2022 stated the following:

The new Fire Brigade Tax rate would apply to the cash received date. The 9% rate applies to any premiums generated after 1 October 2022.

However, guidance on the official Slovenian tax authority website stated that if the inception date for the policy was before 1 October, the 5% rate would still apply. This is regardless of when the premium was collected. This applies until the policy is renewed. At this point, the 9% rate is applied. This is a significant conflict. It’s potentially millions of euros difference in the amount due. Don’t forget the countless corrections required to balance the books.

As well as being issued late, multiple tax return versions were published online. Only one had the updated tax rate included. The return disappeared from the website and was replaced by the original return.

The English translation and other versions haven’t been updated – this is still the case even after the deadline.

However, official communications from the tax authority directly informed us at Sovos that submissions were required by email only.

Again, this is a significant conflict. Submitting returns through the wrong channel would result in the tax authority declaring the submission late and levying fines.

We have communicated all these issues to the Slovenian tax authority. We haven’t received a response yet, but we will update this blog as soon as we have more information.

Sovos has a wealth of experience that enables us to solve issues that arise and ensure our customers remain compliant with the latest tax requirements.

Want to ensure compliance with the latest Fire Brigade Tax requirements? Speak to our experts.

Christopher is a junior regulatory counsel. Based in London, he earned a Bachelor’s degree from Oxford Brookes. Having joined Sovos in 2019, Christopher worked in the registrations department before moving to the training and documentation side of the business to support both VAT and IPT lines of business.
Share This Post
EMEA VAT & Fiscal Reporting
Expert Series Part V: New Roles for IT in the Wake of Expanding Global Mandates

Part V of V – Christiaan Van Der Valk, vice president, strategy and regulatory, Sovos  Click here to read part IV of the series.   Government-mandated e-invoicing laws are making their way across nearly every region of the globe, bringing more stringent mandates and expectations on businesses. Inserted into every aspect of your operation, governments are […]

Part IV of V – Ryan Ostilly, vice president of product and GTM strategy EMEA & APAC, Sovos Click here to read part III of the series.   Government-mandated e-invoicing laws are making their way across nearly every region of the globe, bringing more stringent mandates and expectations on businesses. Inserted into every aspect of your […]

Update: 3 November 2022 by Russell Hughes Making Tax Digital – Filing VAT Returns through Online VAT Account to become redundant From Tuesday 1 November 2022, businesses filing VAT returns in the UK will no longer be able to submit via an existing online VAT account unless HMRC has agreed to an exemption from Making […]