We’ve previously discussed the importance for producers to get licensed for the three-tier system when beginning to sell and distribute their alcoholic products. However, it’s also critical that when a supplier distributes into a new state, they first recognize if they will be selling into a “control system.”

In the control state model, state agencies become directly involved in the beverage alcohol market and are not just outside observers. The state agency will take over one, or more, of the standard “tiers” of the alcohol industry and act in the place of private business. Generally, state agencies act only as a distributor of beverage alcohol, and typically only for distilled spirits. But there are several states where they also operate retail stores, and they can control sales of wine and beer as well.

The National Alcohol Beverage Control Association (NABCA) provides a helpful guide on which states control which products and how. Beverage alcohol suppliers need to be aware of these cases, as that will have a direct impact on to whom they will sell their products (to the state, not to a private company) and how.

Here are important things to remember about control states.

Are you selling into a control state?

Suppliers first must know if they are selling into a control state, as shown below. 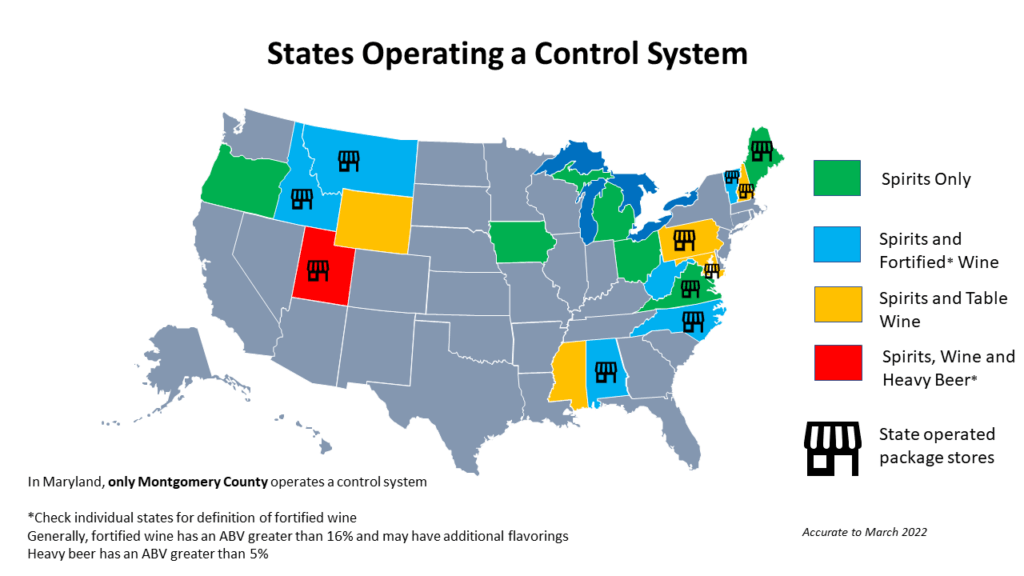 In control states, it is critical for suppliers to recognize that the normal rules and processes that work in all-private “license” states will be different as they will be interacting directly with a state agency to sell their products.

For instance, suppliers selling to control boards won’t necessarily need to have a license. They must still register with the state or otherwise be recognized as a potential supplier. But, there often won’t be an application process to get a specific license that provides permission to interact with private businesses. Instead, it’s more about letting the control state know that you are interested in selling into it.

In addition, the actual process of advertising and selling products will be different. Instead of convincing a private distributor to pick up a valuable product, that effort will need to be made directly with the control board, which will establish unique parameters and methods for choosing which products they will accept for sale in the state. For instance, the agencies may set out specific dates when they will accept quotes and will set out the different criteria they are looking for in a valuable product (such as market share and review of sales in other states). Often, a supplier is required to submit and manage their product quotations through a registered in-state representative.

This then leads to other differences in regulatory requirements, such as brand/label registrations and follow-up shipping reports. Because a supplier will list their products directly with the state, they will not also need to file a brand/label registration for those products. Further, the state does not need to have additional documentation on those distributions because sales are already distributed directly by the state agency.

In the immediate aftermath of Prohibition, as officials were building out new regulations for the beverage alcohol market, there was a lot of advocacy for control agencies. (Control systems were the preferred option indicated in the seminal 1933 policy guide, Toward Liquor Control.) Ultimately, less than half of states adopted a control system, while most went to the private market. But there has been remarkably little change over the years, as only Washington has moved from one to the other. However, that hasn’t stopped perennial debates about the value of a state playing a direct role in the beverage alcohol market.

Just this year, the Mississippi House passed a bill that would privatize distribution and warehousing of spirits in the state. Additionally, a Pennsylvania state representative proposed a constitutional amendment in January 2022 that would eliminate the Pennsylvania Liquor Control Board. While neither of these bills is yet effective, it does show there are ongoing questions about whether control agencies are still relevant.

The control state model does not have to be one that trips up suppliers. Working with the right partner can ensure that you maintain compliance as your business expands and you enter new markets.

Take your three-tier distribution to the next level and see how Sovos ShipCompliant’s Market Ready solution can streamline your compliance processes.